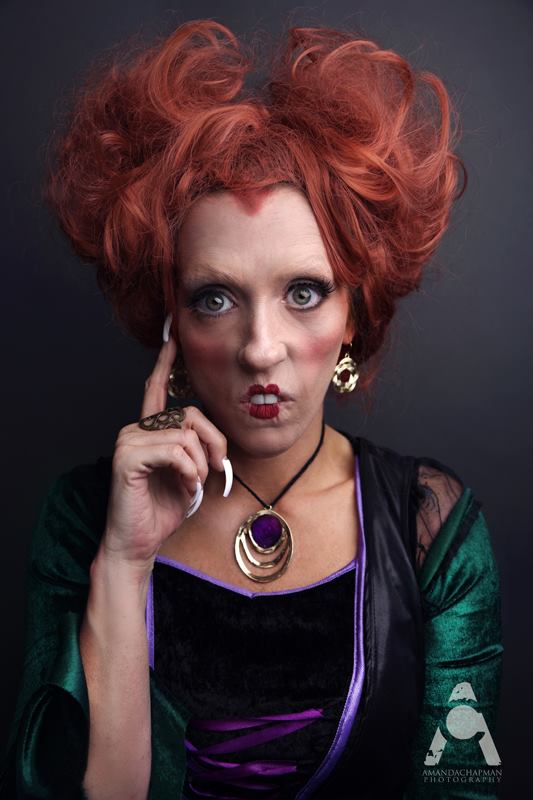 Alabama photographer Amanda Chapman’s world changed dramatically in 2012. Her husband Greg was diagnosed with cancer. Scared about the future of her family, she turned to her favorite holiday, Halloween, to lighten the mood that had overtaken her that year by creating the 31 days of Halloween costume series.

How the 31 Days of Halloween Came to Life

Amanda has always loved Halloween. So, she decided to celebrate it in a way that she hadn’t before in order to help her family get through her husband’s diagnosis and treatment in Sept. 2012. She began creating her favorite Halloween characters daily and posting them on social media. That first year launched what would become her five-year critically acclaimed series the ‘31 Days of Halloween.’

Through her creativity and visual arts talent, Amanda was able to bring her favorite ghouls, goblins, witches and zombies to life each day.  Her creations didn’t go unnoticed, after posting her first few photos, she had fans flocking daily to her social media pages looking for her next creation. The actors and characters she was portraying in her photos also began commenting and complimenting her on her transformation on social media.

I was an early fan of her 31 Days of Halloween series because like Amanda, Halloween is my favorite holiday. I would wait impatiently to see her next creation. Although she currently is not continuing her daily series, she resurrects personal and fan-favorites during the month of October. Amanda’s talent is incredible and her transformation is uncanny and so realistic it makes you do a double-take. Amanda has her favorite characters she likes to recreate from The Walking Dead and Tim Burton films.

Putting on the makeup

“Characters that I dearly love inspired most of the makeup. I’m a huge fan of horror movies as well as Tim Burton films and The Walking Dead, said Amanda Chapman, owner, Amanda Chapman Photography.  “Each character varies in the time that it takes to complete the entire look. The Mad Hatter, for instance, took about an hour last year’s Walking Dead inspired zombie took about 3-4 hours. Getting the shot is somewhat time consuming as well. Self-portraits are not the easiest thing to accomplish and in this case, since I’m portraying another character, I have to try and capture their personality as well.”

“I am often asked how long it takes to transform myself, and I usually answer, it depends on how elaborate the makeup is,” said Amanda Chapman, owner Amanda Chapman Photography. “My Pinhead recreation using SFX makeup took seven plus hours to create.”

Her series over the years has received national recognition and she has won a number of awards for the way she uses makeup and her designs. When her husband found out he was in remission last year, Amanda took a break from the series to spend Halloween in Salem, Mass.

The ‘31 Days of Halloween’ series is still on hiatus, but Amanda will post her favorite looks from the five-year series on social media.

Some of Our Favorites From the 31 Days of Halloween Series:

Our favorite from 2014 Pale Man from Pan’s Labyrinth by Amanda Chapman.

2016  it’s a tie between Medusa and Michael Jackson

Where to Find the Five-Year Series

The five-year 31 Days of Halloween series is on Amanda’s Facebook and Instagram pages. Her makeup tutorials are her Youtube channel. In addition to her 31 days, she offers Halloween costume photography sessions during the month of October.

Note: Amanda Chapman is a well-sought after photographer and SFX makeup artist from the Shoals area in Northwest Alabama. In addition, she began her photography career in 2007 when she photographed Grammy winner and Alabama native Jason Isbell and the 400 Unit.