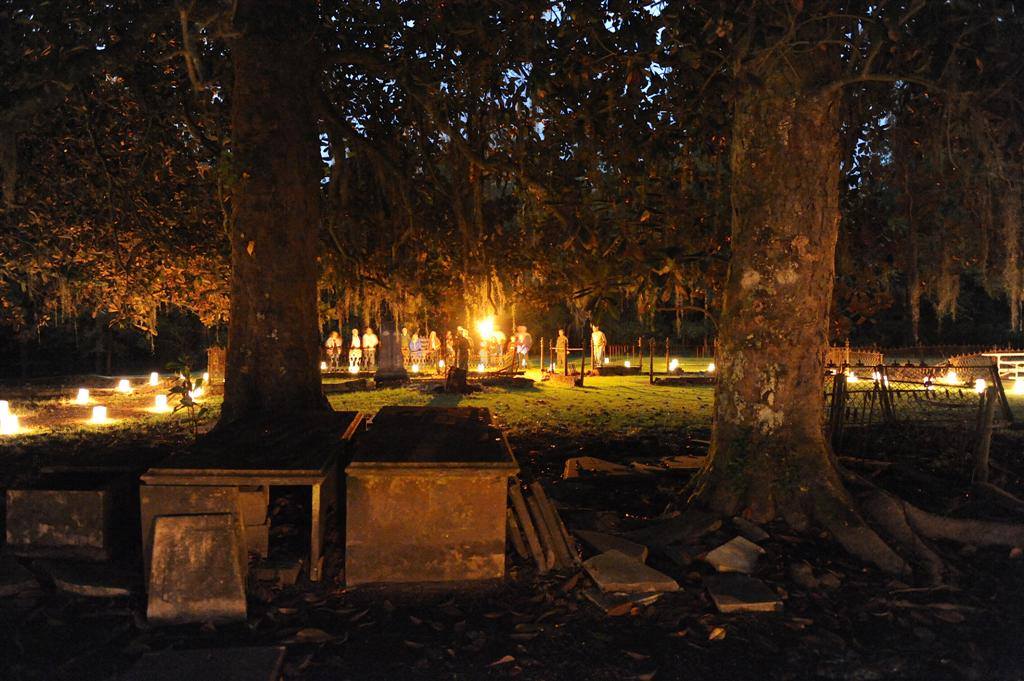 I never thought I would find myself standing in the middle of a cemetery in the pitch dark as part of a haunted history tour the weekend before Halloween.

After seeing a Facebook post for a Haunted History Tour at Alabama’s Old Cahawba in Orrville, Alabama (outside of Selma) that’s exactly where I found myself this past Saturday night, standing in the middle of one of the cemeteries at this historic site. Listed on the National Register of Historic Places, Old Cahawba is a historic research archeological site and is located in Alabama’s Black Belt Region. It was the first permanent capital of the state of Alabama.

Old Cahawba was once a thriving town built at the heart and in between the Cahaba and Alabama rivers. This location would prove very lucrative for the cotton industry and the town would become one of the richest towns in the U.S. during the 1800s.  Many of the white residents left Old Cahawba when the state capital was moved to Tuscaloosa, Alabama in 1826. The factory in the town became a Union soldiers’ prison during the Civil Was.  When the Civil War ended, Old Cahawba was settled by emancipated slaves and became a booming cotton town., By the 1890s Old Cahawba had become a ghost town. The Cahaba Foundation was founded in 2008 to help raise private donations to preserve the site. Today, Old Cahawba is an archaeological research site.

Old Cahawba is known as ‘Alabama’s most famous ghost town.’  The town is one of the most haunted places in the state according to the book Haunted Alabama Black Belt written by David Higdon and Brett Talley. One of Old Cahawba’s first ghost stories was written about in Kathryn Tucker Windham’s book 13 Alabama Ghosts. In 1862, a young couple promenading near a maze of cedars saw the ghost as they walked through the maze. They described it as a white orb. When the couple tried to touch it, it vanished into the shrubbery. The orb appeared again and floated alongside the couple. According to legend, the ghost was named after Colonel Pegue who was a resident of Old Cahawba. The colonel was head of Alabama’s Fifth Rifle Regiment and his home was the social center of town.

The New Cemetery at Night

The annual Haunted History Tour is the only time during the year visitors are allowed inside the park at night. I bought two tickets for the sold out tour last Saturday night. A friend and I drove to Orrville from Birmingham, a little over two-hours away. When we entered the park we noticed to the left the Greek Revival Episcopal Church and across from the church is the Visitor/Information Center which is a replica of the John Tyler Morgan house. Selma’s Tally Ho Street Kitchen was onsite for visitors to enjoy dinner before the tour. We arrived early so that we could eat before the tour.

The first tour guide gave us the ground rules and we boarded an open-air converted cotton wagon which drove us into the dark starry night to our first stop, the New Cemetery.

The guides who met us at the entry of the cemetery told us stories that had been handed down for generations people’s encounters with the after-life.  The grounds keepers often heard voices talking to them while they worked. School groups also have recorded unusual sounds as they study the tombstones. Photographers and videographers who have filmed in the cemetery have reported unexplained lights or shadows in their images. The guides also talked about encounters they have had that they could not explain.

One of the scariest stories we were told, was about Herbert the grandson of one descendants of the Kilpatrick family. Herbert spent the summer with his grandfather at Old Cahawba.  When he returned home, he told countless stories about Gatt the gentleman at Old Cahawba who watched over him while he roamed the grounds.  Herbert’s brother told him it was impossible for Gatt to have watched over him because Gatt died before he was born.

Paranormal Activity at the Barker House

Our next stop was the slaves quarters located at the other end of town. The house became the home of Steve Barker and his family after the mansion that stood in front of it burned to the ground. The dilapidated conditions of the house make it impossible for visitors to go inside the home. The Alabama Paranormal Research group was inside the house investigating paranormal activity. We got to take part in their investigation.

We started our investigation in one of the rooms on the second floor. The paranormal investigators had equipment set up and told us what they had experienced with each tour group. The creepiest moment to me was a stuffed animal that seemed to be communicating with something in the room. It would blurt out questions when any paranormal energy was around. Investigators also stated that a ball they placed in one of the room rolled across the floor by itself. It was eerie being inside the house.

The tour ended where it began at the Old Cahawba Visitor’s Center.  You will have to choose for yourself whether or not you believe ghosts roam Old Cahawba! It was definitely a spooky experience, one I believe you should try.

Note: A hundred percent of the ticket price from the tour will be used for research and restoration efforts at Old Cahawba.