I Must Have Been Out of My Mind, I Tilted Off the 94th Floor 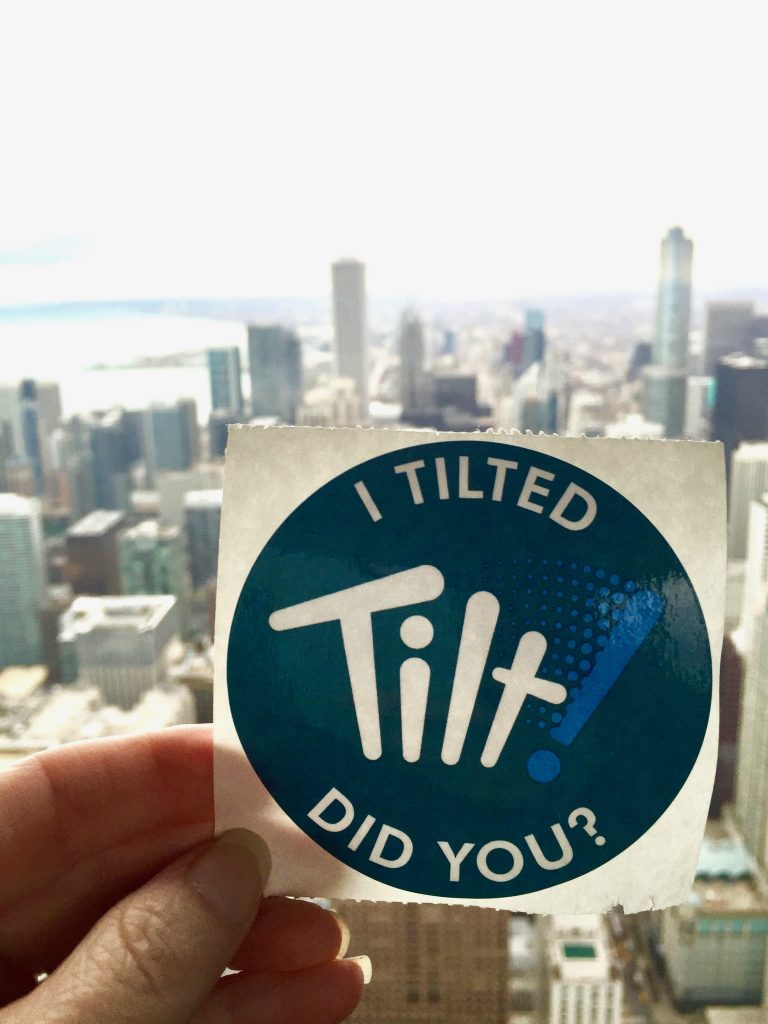 I love traveling to big cities.  In fact, my ideal vacation is exploring all large cities have to offer. Last week I was able to travel to Chicago for a business conference. After each day of classes, I took the opportunity to explore the city. The first time I traveled to Chicago was eight years ago, and at the time, I didn’t really get to see much of the city.

This time, I arrived early afternoon the day before the conference started. After checking into the hotel room, I went out to see what was right in the vicinity of the hotel. My hotel was located a block off of the Magnificent Mile a well known shopping district in the heart of the city. After grabbing lunch, I decided to make the long walk (long in my mind because I haven’t walked like that in a while) to Chicago’s Navy Pier, a popular tourist attraction on Lake Michigan.

It was too early in the season for the rides on the pier to be operational, but it was still fun to see the area. On Chicago’s tourism website, the Navy Pier, originally built for shipping and recreation, and training for the navy is 3,300 feet long. It opened to the public as an entertainment destination in 1916. For its 100- year anniversary, a new Ferris wheel will open this summer. I walked around the pier taking in all of the sites and the beautiful lake. I also walked to see the statue of Bob Newhart at the end of the pier. ‘The Bob Newhart’ show was a sitcom about a psychologist in Chicago in the 70s.

During the conference, I met a colleague from the University of Wisconsin, and we decided on the second night to walk to Millennial Park.  She lived in Chicago for several years, so she was very familiar with the park.  As we were walking to the park it began to rain, but that didn’t stop me (this tourist) from enjoying the walk to the park.  The thing I like about larger cities is that there are a lot of attractions that are free. Like Central Park in New York City, Millennial Park is a park in the heart of Chicago.  It was built to celebrate the second Millennial.

The park is considered the largest rooftop park because it’s built on top of a rail yard and parking garage in the Loop neighborhood of Chicago. The park also has arts and performing venues, an ice skating rink and Cloud Gate a three story steel sculpture that’s been dubbed the Chicago ‘Bean.’  It does look like a bean.

On the last night I was in Chicago I decided to do something daring. In fact, it was a very big stretch for me to even consider doing what I did. The 94th Floor of the John Hancock building offers 360 degrees of breath-taking views of downtown Chicago.  In the last two years, the building has added what they call the ‘Tilt’ which is a ride that takes you out off the side of the building at a 30 -degree angle. Now I am the one who used to close her eyes on the Great Gasp ride at Six Flags over Georgia because, I am technically afraid of heights.   I am not sure what possessed me at this time to take the plunge, so to speak, to try this, but I blame the Today Show for featuring it and the glass platform at the Willis in Chicago.

I again talked my colleague from Wisconsin into going to do this with me. As we’re walking down Michigan Avenue toward the John Hancock, I pointed out to her the Tilt on the side of the building.  She was reluctant. But after we got to the building and paid to go to the 94th floor, she was ready to ‘Tilt’.  The ride itself is an adrenalin rush; and you do tilt out over the building to see the business district of Chicago.  You look down and you see the pavement, but you don’t think too much about that because of the nice spa music playing in the background as you ‘tilt.’  The cost to tilt and go to the 94th floor is $27. But it was well worth the money because, it did challenge me to be daring and try something new. I am refreshed and invigorated!