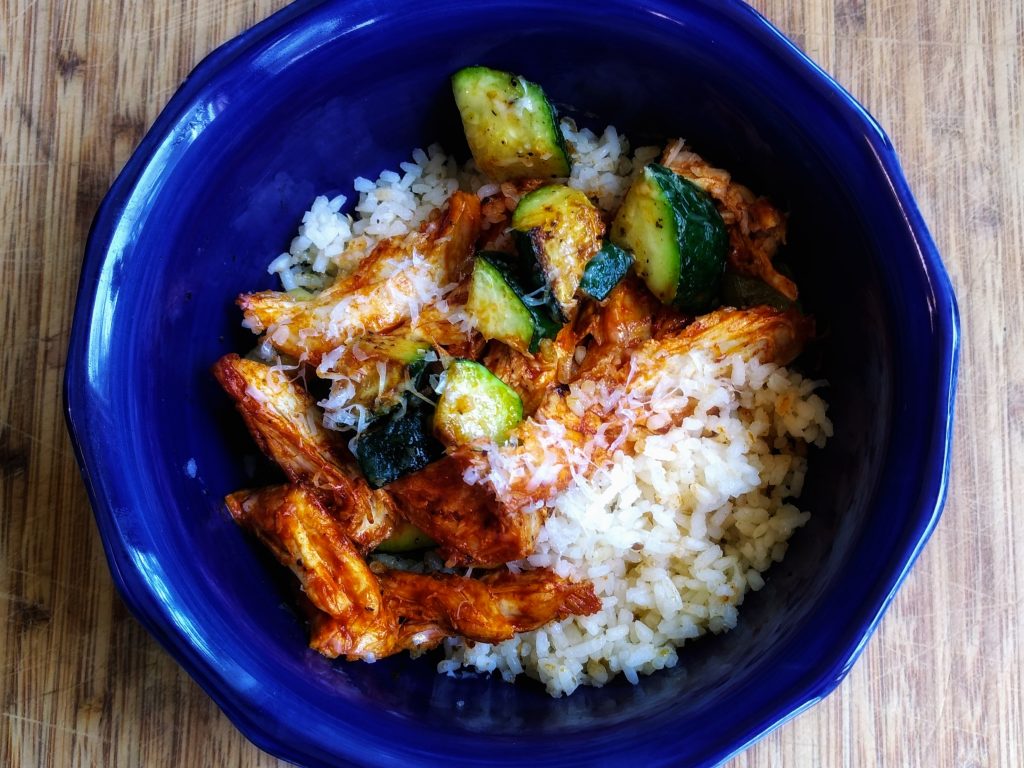 You’ll see middlins (rice grits) on lots of menus around South Carolina’s Lowcountry, where honoring African diaspora cuisine is a priority among the food community. Rice holds a special place in South Carolina history, for sure. The story of middlins, like so many other classic southern staples, is a humble one.

Did you know that Georgia and South Carolina plantation owners payed a higher price for slaves who were from the rice-growing regions of West Africa? Rice, and the methods of growing it in the boggy South Carolina Lowcountry and the Georgia lowlands, came to America with slaves as early as the 1600s. Its cultivation was a huge part of the southern economy up until the Civil War, and just like cotton, it was an industry powered by slavery.

Carolina Gold rice was the grain of the 18th and 19th Century in North America and Europe. It was prized for its stability and delicate flavor, and it sold like mad. Have you ever been to Charleston? As the BBC puts it:

“All those pristine church steeples pointing heavenward and those well-preserved Italianate, Queen Anne, Greek Revival, Georgian and Federal structures flanking the town’s enchanting streets? Those were all paid for with highly profitable Charleston Gold rice–so named for the unique rice fields, which turn a gleaming gold when ready to harvest.”

The Rice Was Fragile

Female slaves pounded the grains by hand, working with  a mortar,  a pestle and then a winnowing basket to release the chaff. It was a tedious task, and there were a lot of broken grains along the way. The fractured rice, known as Middlins, is still a staple in African and Vietnamese cooking today. Ever heard of Cơm Tấm? This popular Vietnamese pork dish features broken rice.

While you can special order middlins, you can also make them at home. I like to save the last bits of rice in the bag, and when I’ve accumulated a few cups, I toast the grains on a baking sheet at 350° for about ten minutes, and then I break them by placing the toasted rice in the food processor. You can rinse and drain the dust off of the grains once you’ve pummeled them if you’re looking for more of a rice texture. Leave all the dust in for a creamier result, especially if you cook them using a risotto method.

The recipe below features roasted chicken and a homemade red chili, along with sautéed zucchini. This simple meal is filling, easy and the leftovers can be used in lots of different applications, like Chicken Enchiladas with Middlins and Pintos or Vegetable Fried Rice Grits, for an Asian variation. It’s really just short rice with lots of opportunities!

Add the rice grits, salt, and water to a pot with a lid. Heat over high heat, stirring once or twice, until the water starts to simmer. Let the water and rice come to a boil. Cover, reduce the heat to low, and cook with the lid on for 15 minutes. Do not remove the lid! Remove from the heat and allow the rice to rest for 10 minutes. The rice will have absorbed all of the liquid.

For this recipe I roasted bone-in chicken breasts with the skin in a 350° oven for about half an hour. I rubbed the raw breasts with olive oil and seasoned them with salt, pepper, oregano, paprika and cumin. I also stuffed raw garlic cloves under the skin. About fifteen minutes in, add a few Tablespoons of water to the roasting pan and spoon the liquid over the top of the breasts. Continue to cook for ten more minutes, spoon the liquid over the tops again and then broil on high for five to seven minutes, or until the skin is browned and crispy. Remove from oven and let cool. Shred the chicken and reserve.

For the red chili:

Take a small bag (10-12) of dried guajillo chilis and remove the seeds and stems. You can accomplish this a variety of ways, but I like to pour boiling water over them and let the seeds float out. Let them cool and then strain them whole, removing the stems and seeds. Bring 3 1/2 cups of water to a boil and add the chilis, along with two large cloves of garlic and a bay leaf. Let them simmer for 20 minutes. Remove from heat, and place the chilis and the garlic in a food processor. Add 1/2 cup of the cooking liquid, along with 1 teaspoon of honey, 1 teaspoon of balsamic vinegar, a few pinches of salt and red pepper flakes to taste. Pulse until smooth and cook again, this time letting the sauce simmer for about half an hour. During the last 15 minutes of cooking,  add 1 teaspoon of cumin, 1 teaspoon of oregano and adjust the seasoning.

Toss the red chili with the shredded chicken, and use as much as you like! For the zucchini I cooked them with 1 Tablespoon of olive oil in a hot pan and sauté them for a few minutes on each side. Serve the chicken and the zucchini over the middlins, and add some extra red chili if you like. I topped mine with Parmesan cheese.