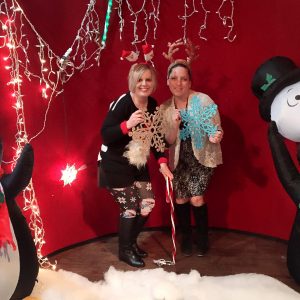 It is truly unbelievable that the end of 2015 is almost here.  My mam’maw used to say that “Time passes so quickly the older you get”.   I never wanted to believe it, but she was right.  I have struggled this year to get into the Christmas spirit, I guess it is because it arrived so quickly.  So I decided to volunteer to host the Whacky Tacky Christmas Light Tour.

This is a fundraiser for Fresh Air Family.  The money raised from this event is used to send children to their “Gross Out Camp” which is a math and science camp held during the summer.  Anyone who knows me, knows that I like to give back to the sommunity.  When I was asked to be a bus host for the tour, I didn’t hesitate.  The event started at the Avondale Brewery.  We met to there for dinner and then boarded our bus to begin our tour through Birmingham, Homewood and Crestline.  Volunteers were to wear the whackiest, tackiest Christmas attire that we could find. So not to disappoint I wore my merriest Christmas sweater with my Santa leggings. 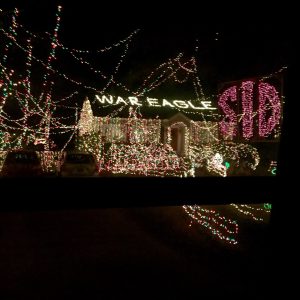 I was in charge of reading the script on the bus to point the various sites. It was fun and at times I had to ad lib.  One particular part of the tour the bus driver made a wrong turn and we somehow managed to get through a tight narrow road without damaging the bus or the parked cars.  I had to divert the passengers attention so I really had to think on the spot and explain some of the unexpected sites.  We saw some of the most decorated homes in the Birmingham area. We took a break in Crestline at the La Paz restaurant.

As the passengers were leaving the bus and heading over to the restaurant was where I found the reason I was meant to volunteer for the event.  One of the riders on the bus was having difficulty dealing with a personal issue and needed someone to listen.  It only took a moment in the scheme of things.  Even though this person was a stranger I opened my heart and listened.  Standing in the cold parking lot the spirit of Christmas came over me as I listened. This stranger only needed to be heard and validated and I was there.