We sat down with Nashville singer-songwriter Mark Elliott to interview him about his new book The Sons of Starmount, which is about childhood innocence and adventure, to see what the response has been since he released it back in February. The audiobook will come out in the fall. There also is a companion EP Sons of Starmount now available.

The book was born from Elliott’s love of songwriting, blogging and telling stories about his childhood. We found the book intriguing, quirky, funny and reminiscent of what life was like growing up in the South in the late 70s. Most who grew up in that era had a pack of friends who were adventurous, who dared us to do things, who we got in trouble with and who helped us shape who we are today. Elliott’s book takes you back to days when kids let their imaginations captivated them, and before children lost their innocence to screens and instant notoriety.

Where did you get the idea for your book?

Mark Elliott: I’ve been a singer/songwriter for the past three decades, and have written for many of Nashville’s music publishers. With the music business changing by the day, and sometimes not for the better, I thought I’d search out the one creative industry uglier and more poverty-producing than music. I found it in being an author.

Mark Elliott: In all seriousness though, starting a blog a few years ago, and having the room (500-1,000 words a week) to write, intrigued me and sparked a new interest in writing. I enjoyed having room to develop thoughts beyond a two-and-a-half-minute song. As I began thinking beyond the blog, a book seemed the next step for me.

“The memories of friends, the outdoors, and all the adventures I had on Starmount, in 1977 have stayed with me throughout my life I wasn’t necessarily looking to start my author career with a memoir, but you tell the story begging to be told,” said Elliott.

What is the Sons of Starmount from your perspective?

Mark Elliott: We all have a place and time in our childhoods that help define the adults we eventually become. Seeds are planted, and habits are formed. The experiences and relationships we share when the world is still wild, and our hearts are still open to it all – sculpt a life like the forces of wind and water do upon canyon walls and ancient river beds. This is the story of how an era as free as the seventies, with its parental permissiveness and music, coupled with a one-in-a-million neighborhood filled with friends, swamps, creeks, woods and tree forts, set in motion a creative and adventurous life rarely devoid of either.

What did your friends think of The Sons of Starmount?

Mark Elliott: Two or three of the old friends seemed interested and enthusiastic and helped to fill in my 40-year-old memories. And others were either care-a-less about me telling our story or outright uncooperative. It had been 40 years since I had seen all of them and nearly 20 since I had seen some of them. I thought that the dilution of time and circumstance was the main problem.

Mark Elliott: But in writing the book and having some of the conversations, it became clear that I left Starmount at the perfect time. I left the neighborhood while the waters were still wild and the trees were still tall. I left before the bull dossiers pushed through the dead end and the woods, all the way to the mall parking lot. The rest of my friends, those who stayed on Starmount through their teen years, witnessed the slow undoing of Neverland, to the point where it was just another street in any town USA.

What do you hope people take away from the book?

Mark Elliott: The stories in the book are, I hope, funny and poignant, and filled with an Americana zeitgeist that most will relate to. My earnest hope for the reader is that they find their own Starmount, no matter what generation or geography it may lie in. The experience of finding those straight lines between the man or woman you’ve become and the boy or girl you once were, is a unique one. The journey is not always easy or obvious, but I believe it to be for all of us, a journey well worth the taking. I hope my Starmount points the way to the reader’s Starmount.

We first met Mark Elliott and his band Runaway Home six years ago in Alabama at the Black Creek Arts Festival. The band was the headliner for the festival. He continues to tour with the band. He also has received accolades for his songwriting. The song he wrote for Neal McCoy, Everyman for Himself, hit the top 40 Billboard Chart. Billboard called the song, “a song with rare lyrical and musical edge and the best cut on the album.” He also has written other award-winning songs. Elliott is currently working on Rippers, a novel with co-author Joe Johnston. Click to purchase The Sons of Starmount and companion EP.

This week’s edition of the Birmingham Shines podcast retrospective series is a rewind of episode 3 featuring Sheree’s conversation with Javacia Harris Bowser. This episode was released on May 13, 2015. 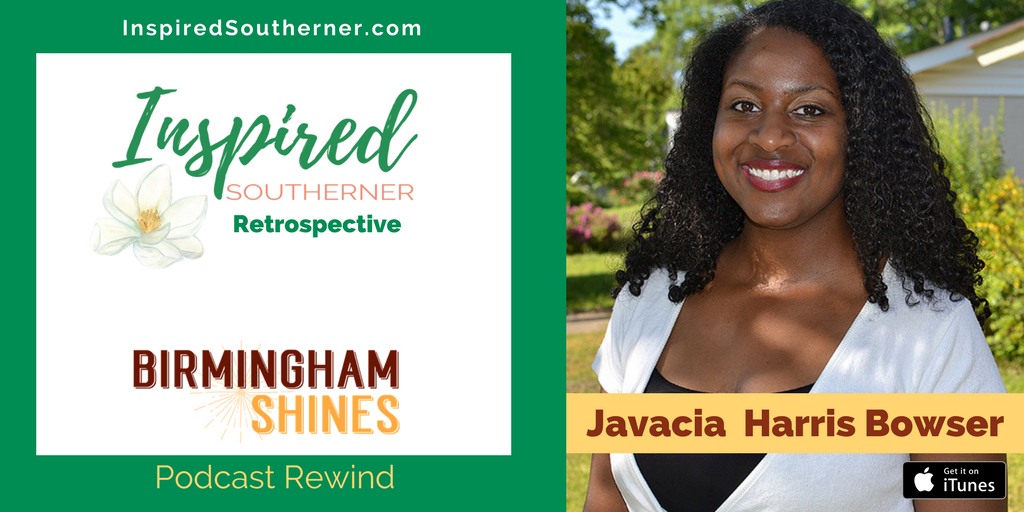 Javacia Harris Bowser talks about founding SeeJaneWrite-Birmingham when she couldn’t find the writing group she was looking for.

Javacia Harris Bowser, my guest for Week 3 of the Birmingham Shines
podcast, is a writer, teacher and entrepreneur. She’s also a successful blogger and founder of See Jane Write Birmingham—networking group for
women writers that has turned into a business.

Javacia moved to Birmingham several years ago from Louisville, Kentucky to teach English at the Alabama School of Fine Arts. Before embarking on her teaching career, Javacia worked professionally as a journalist and she continues to do freelance writing work today.

Do one thing every day that scares you.

That’s the inspirational quote that Javacia shared with me when I asked her for something to inspire others to Discover. Grow. Shine.™

If you want to grow, you must be willing to get out of your comfort zone, even
just a little bit. When you do, you usually find that it wasn’t so bad after all—especially if you’re taking little steps. No need to take up hang-gliding. Just send an email to someone you admire and don’t know and invite them to coffee. Take a different route home from work. Or maybe do your grocery shopping in reverse order from your usual routine.

It’s pretty clear that Javacia is willing to take her own advice.

When Javacia couldn’t find the type of writing group she was looking for, she decided to start one. The first “official” meeting of See Jane Write Birmingham was a simple dinner meet-up on March 24, 2011 at a Mexican restaurant in Birmingham.

That meet-up led to a “next event,” which was all about using Twitter to network, connect with others and build a blogging audience. The successful Twitter event led to a blogging workshop and into one-on-one consulting and even bigger events.

Lean In: Women, Work and the Will to Lead by Sheryl Sandberg

Where to eat in Birmingham….

Where to caffeinate in Birmingham….

Where to get fit….

I love Jennifer Dome King’s blog Stellar Fashion and Fitness. It has such a great message about body positivity.

I’ll echo this one—I got up before 5 a.m. to start writing this blog post [in 2015]. I’m a big believer in “early to bed, early to rise.” If you know me at all, you probably know how I go on all the time about Ben Franklin!

I hope you are inspired by Javacia as I am! 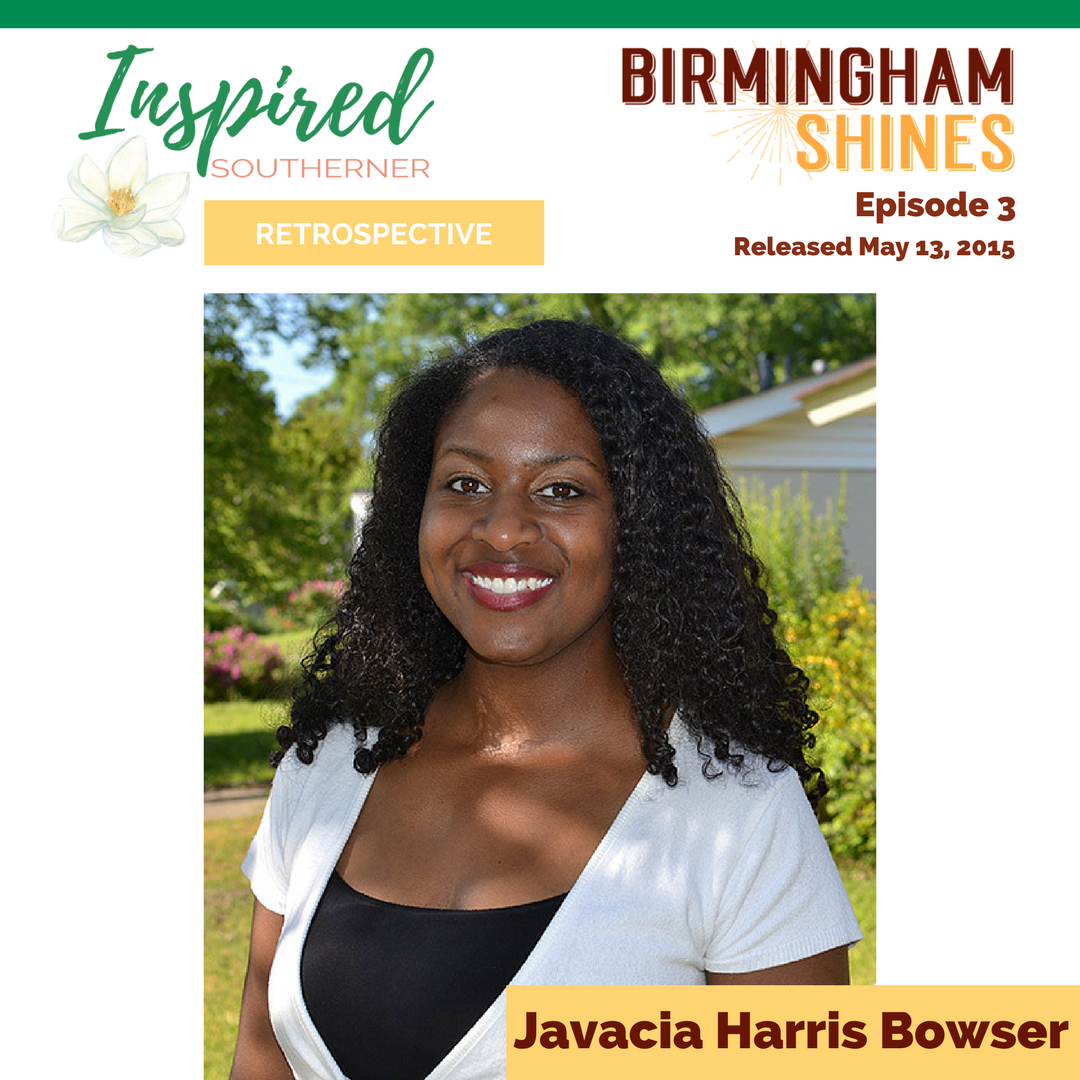