The Lost Art of Handwritten Notes and Letters 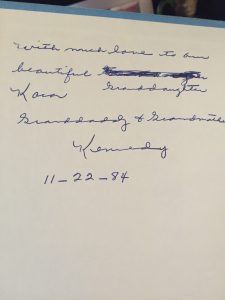 Nowadays we are so preoccupied by our smart phones and computers that we are losing the art of the handwritten note and letter.  I can’t tell you the last time I received anything handwritten.  Sure it’s quicker to type out a message or text, but sending something handwritten to someone means that you took time to write out a message specifically for that person.  I often try to slow down and remember to send a handwritten ‘thank you’ note to someone.  Admittedly though, I have to make the time to do this.

My grandmother Kennedy was very meticulous about handwritten messages, notes and letters.  I remember receiving a high school graduation gift from her cousin (my second or third cousin). After I opened package, she immediately went to her secretary (desk) and pulled out her note cards and made me write a ‘thank you’ note to my cousin and mail it.  My grandmother believed that a handwritten note was the ultimate way to showed our gratitude.  She also believed in sending greeting cards for every occasion.  Each card had a special handwritten message especially for me.   She knew me so well I wished I had kept those cards.  I loved reading and re-reading them.  At times she would include a letter in the card because she couldn’t say all that she wanted to in that little area on a the card.

I still have a book she gave me for Christmas one year with a special handwritten message on the inside cover.  She signed it from her and my grandfather.  As far back as I can remember, Southern etiquette meant Southern women sent and answered correspondence for themselves and their husbands, so my grandmother would always sign her messages love ‘Granddaddy and Grandmother Kennedy.’

After my grandmother passed away, my cousin, the one who sent me that graduation gift, and I began writing back and forth. She would include longer letters in her cards.  I still have some of her letters.  Her style of writing, even her handwriting, reminds me so much of how my grandmother wrote.

How is it that we have gotten away from handwritten messages, notes and letters?

Handwriting is an art form. A note, letter or message handwritten means the words come closer from the heart.  Handwritten letters show that the author put a lot of thought into the words written on the page.  It’s lovely how the thoughts flow from the brain to the pen to the page.

I have personally gotten into the habit of trying to emulate my grandmother’s practice of including special handwritten messages in the greeting cards I send.  However, I am far from making it a practice of handwriting letters.  Sometimes the closest I come to handwriting anything is when I jot things down in a journal.  CBS Sunday Morning did a story on the “Lost Art of the Love Letter” and the play Love Letters with Ryan O’Neal and Ali McGraw. It also examined the lost art of handwritten letters in today’s digital world.  In this news story, a man is interviewed about the 119 love letters he found in a box after his wife died.  He said “seeing the letters in her handwriting for a moment brought her back to me.”

I can honestly say that I see where he was coming from. Just opening the book from my grandmother and seeing her inscription takes me back to the day I opened it, which is a beautiful memory.